All bias aside... you probably should not read anyone else's review but UR's.  Seriously. Everyone else will probably spoil the good stuff about this movie and make it an expensive and underwhelming night unless you’re a real die-hard fan boy/girl.  (And this comes from someone who saw this movie the Thursday night it was released.)  That said, Avengers 2 ain't exactly ground earth-shattering, but it is still pretty good.  In the ever-growing and increasingly tiresome field of superhero movies, Avengers: Age of Ultron is a pretty solid flick.  No, it doesn't live up to its predecessor (Avengers), but it stands on its own merit as a good movie with nicely proportioned components of humor, action and seriousness.

IF YOU MUST KNOW: 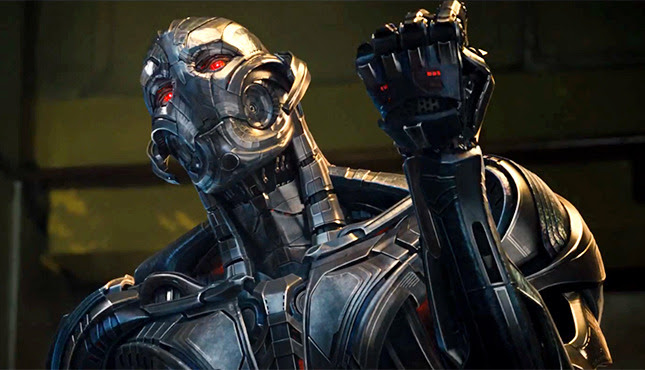 Tony Stark and David Banner's furtive incursion into the field of peacekeeping artificial-intelligence goes completely awry.  Hmmm... that's about all you need to actually know.  If I started telling you the other details it would kind of kill what there is to like about the movie.  What I can tell you is that Avengers was fun, it was entertaining, they introduced a bunch of new people and other stuff into the Marvel movie world and managed to be engaging and cohesive enough that you don't realize how much you're being set up for the next flurry of Marvel pictures on their busy and aggressive release schedule.  Yet... Age of Ultron misses the high standard that Avengers set for itself back in 2012.

Do you remember the last Iron Man movie with poor Sir Ben Kingsley as the ridiculous Mandarin?  If you don't, bless your heart.  You're better off for it.  If you do, then you may see a similar misstep in Avengers 2.  Joss Whedon uses James Spader's effortlessly snarky voice to create what sounds like a truly ominous villain - and I always say, if you want a good superhero movie, you MUST have a really good super villain. That's where the misstep occurs.  The sound of Ultron is awesome... right up until he starts making too many jokes and going a little bit goofy. I expect my villains to be funny consistently in a twisted sort of way, but not to actually crack jokes.  That cheapens their sinister-ness.  Plus, Scarlet Witch (the most talented Olsen girl) and Quicksilver team up with the comically maniacal Ultron to form a dynamic "Big 3" to go up against Earth's mightiest heroes; they give Iron Man, the Hulk, Thor and the other Avengers the most dangerous imminent threat humanity has faced yet.

The speciocidal (if that is a word) Ultron and his enlisted 'enhanced humans' test the Avengers physically and put as much relationship strain as you can put into a Marvel movie.  Of course, everyone knows it all has to work out in the heroes' favor, but they give us some cool looking fight scenes along the way (when the CGI was managed well and the green screen wasn't obvious) to try and fool us like they might not make it AND they incorporate Jarvis (Stark's AI butler) into the movie as a more integral part than he has ever been before.  It's safe to say, Jarvis was always one of the coolest things about Tony Stark.

The high points of the movie included the candid moments between the Avengers and the action sequences and the mention of the kingdom of Wakanda (the fictional location of where "vibranium" - the stuff that makes Capt. America's shield - comes from) - if you mention Wakanda that means:  Black Panther!  Word.  Unfortunately, there was no actual Black Panther siting, but still... I'm looking forward to a non-sidekick black superhero (not played by Halle Berry).

Overall, Avengers 2 brought enough to the table that I have to admit is was enjoyable (and I heart Scarlett Johansson, so watching her flip and fight in that outfit is always fun), but  even the stellar Scarlett did not make Age of Ultron

as good as Avengers 1, Iron Man 1, Thor 2, or Capt. America 2, or Guardians of the Galaxy. It was at least as good as all the other movies in that series.  Word of advice for you - SKIP IMAX AND SKIP 3-D FORMATS (definitely skip IMAX 3-D; it aint worth paying 25 ducats) the movie seems to have been filmed more in 2-D and converted to 3-D, which makes it not worth paying for in 3-D.

Note: Don't forget that there is only one post credit scene.  So after you see the 3 second teaser for the next Avengers, you do not need to stay a second longer - like my dumba$$ did.  Just bounce.

5 = You should be about halfway to the theatre by now… Well… GET!
4 = Definitely worth the bread. Niiice.
3 = I won’t cuss anybody out and demand my paper back.
2 = Somewhere SOUTH of under-whelmed./I know it has a pulse, but…
1 = Not a good look. They played me AND I played myself.
thrown on here by IMTHATDUDE at 10:55 PM

Thanks for leaving a comment for UrbanRhetoric. We really appreciate the feedback, questions, ideas + love. Holler

UrbanRhetoric is written mostly by pemora with some help by her rad friends (IMTHATDUDE, Paj1, DOUGH, jayare20k, MissDTM, Charlie Mango). They all have a love/hate relationship with pop culture. If you want to read more and/or would like to contribute, follow us on Twitter. Holler.

Promote Your Page Too